A downloadable game for Windows

A week in just five minutes.

A closed off room, just eight tatami in size.

A small world for you to save.

This game is a puzzle adventure that takes from thirty minutes to an hour to play through.

The themes included in this game are rather dark, so please keep that in mind.

One week, My room is a free game.

Please double-click the file named "One week, My room1.1.exe" to start the game.

could you make it available for ios?

Dang this is so sad but great job

interesting game. very confusing, but i still enjoyed it and was content even if i didn't make sense of every detail. excellent pixel art and animation. especially big brother, that's one creepy sprite!

Fantastic game and great story with a fitting atmosphere. I really love the BGM that plays while you read the tips. What BGM is that and where can I find it??? I’ve been searching everywhere but cannot find it. I’m desperate to find it, it’s very captivating.

It seems as the original composer (who was linked in the game files) cannot be found - the link is broken. However, the music you're wondering about can be found here;

Wow. What an onion cutter. This is so unbelieveably good at bringing the story to the player piece after piece and unraveling the clues that were hiding in plain sight all along. A truly beautiful artwork alwhile also raising awareness towards one of the many problems that sosciety has yet to overcome. I love this.

I'm not sure I understood everything about the game, but I really did enjoy the ambiance and the dark themes. I also made a french playthrough of it!

Reply
Anna~H 20b2 years ago

Uhm I can't seem to open the game after downloading it, also there's something that pops up that's in Japanese (should I screenshot it for you to see?)

It says "you may solve it by installing newest DirectX".

I want you to try.

Can you make a mac version of the game?

Sorry.
We'll not do it.
We'll spend our time for new game.

i download you game and i think is bored, the pixel art is cool but the history i don't know.

Thank you for making this game. Thank you for bringing these things to light and giving people who suffer from such horrors a voice. You are an incredible person... just... thank you.

Hello what language was this used with? VB? C++? Wolf RPG Editor? Also will u be making future games? Loved the mature/dark themes in this one.

We'll try to make new one by December.

Yatta, arigatou! From Japan? So many web 2.0 sites!

At first, I thought the game is about the hikikomori phenomenon, but it turns out otherwise.

As someone who is (unwillingly) stuck inside a small room every day, the banal horror implied by the line "X is home, so I can't leave the room." cuts very close.

Ultimately, I'm glad for the game's protagonist that his X is not a cruel monster disguised as a self-serving human.

The game's message is good to bear in mind, for poverty-induced neglect &/or social isolation is very real indeed, even if most people are blissfully oblivious to it.

I know this comment is from 3 years ago, but I just wanted to say I'm in the same situation. I felt the same way when I read that line, too. But as you said, the protagonist is in ultimately a different and better situation.

This game is unlike any other I have played before, and before I go on, I must say that you have created a game that is quite beautiful, In its own way - the plights of the character are something I can understand and sympathise with, and the ending was one fitting of the broad scope of this rather small world - I congratulate you on creating this, it is a game I won't forget for a long time. ;-)

on a bug report note, I noiced that the captions that display the current (game) date show the wrong day (they show it as being the next day over: sunday in the diary is displayed as monday in the selection part of the game etc. [The part where you choose what to do for the day])

That is the original specification．:D

the game was I don't have words the ending was unexpected  do more games like this I really would appreciate this subscribe today for more videos:https://www.youtube.com/channel/UC87ACz99Buum0tospPSQSbA

the ending made me happy

Very cool. I'm not 100% sure I understood it all but it was definitely an experience.

A very well put together game in both story and gameplay! Almost teared up a little bit too.

I got all the tips and endings!

Absolutely love the game. As someone who has been in closely the same situation, the character's plights felt real and very serious. The music complimented how tightly, yet loosely the character was holding on to the will to live.

Beat it, but didn't get one of the clues. Nevertheless, hope to see some more games like this out of you!

I really REALLY liked this. Very well done. If it doesn't seem like I like it, it's only because of my sense of humor. xD

This game was amazing but also very simple...and I think that's what makes it great.

Not everything is sunshine and rainbows....

Simple game, but it really did leave a mark. Great job for everyone who helped make this game possible!

Ahh, this is such a deep game. I really connected with a lot of the issues being raised, and it really touched me.

I'm looking forward to playing this again when the text error has been corrected, but in the meantime thanks so much for making this, and keep up the great work!

I am blown away by the story this game tells and the attention it draws to a number of social/economical/psychological issues. I collected all of the tips and "failed" a lot. But I eventually got an ending I was satisfied with. I love that the gameplay loop is so simple and restrictive, but that the narrative is so powerful. Unfortunately, the version I played has an issue with text getting cut off so I had to guess at what was being said, sometimes. Still, a delightful and dark experience that speaks of real issues.

CANT BELIEVE I CRIED | One Week My Room Game - This game really had me in tears. I'm glad it had a happy ending but with suicide in the limelight at the moment this game shows an important message... someone is there for you.

This is really a great game. It's simple, but tells a story very well

On another note, how do I get tip 9? That's the only one I don't have unlocked.

Thank you for playing.
Please choose various things.
Perhaps some choices are missed.

Wow, its dark, but thats what makes it work... Amazingly thought through.

HOW DO I MAKE THE SCREEN BIGGER sorry caps >:( caps beacuse the word go off the screen?

Only 2 types of screen are prepared:
normal or small

At ver 1.3, we'll fix the problem that  the word go off the screen.

This game was more than I expected.  I can't wait to unlock all of the tips and find out more about the story.

This is an interesting game, it definitely has some very dark themes to it, but that's what gives it its character. The art style's quite nice and the accompanying music is great.

It's simplistic in its gameplay, but complex in its meaning. If things are done in a certain order I'm assuming the end turns out much differently, I would like to think that in my playthrough I got the "good" ending but that's up to interpretation.

The only issue I had was that sometimes the text would run off the screen, I'm not sure if it was a bug or because of my screen resolution, either way, I didn't let it take away from the experience of the game's core message.

It's a game that makes you stop and think about things. I quite enjoyed my time with it.

I hope you don't mind but I recorded a short let's play of the game.

I rather enjoy the simplicity of the game so far. It's short and relaxing gameplay wise; although, the undertone of the big brother bit is pretty startling.

I loved this! Just one question, how many endings are there?

I unlocked all the tips and got three endings (SPOILER:), is there another one I've missed?

That's all of endings.

So many questions after playing... :) Were the tips supposed to have more information?

Hmmm your version of the game seems to be a bit buggy. The tips aren't supposed to be empty, and your mom is supposed to show up on the balcony after you slipped the diary under the door.  Are you playing version eng1.2 ?

If you send us mail, you can get  txt files of Tips.
Or, if you copy and paste your savedata.bin, you can read Tips in new version.

It almost looks like a sad game, but so glad the ending isn't bad!

Thank you for your playing! 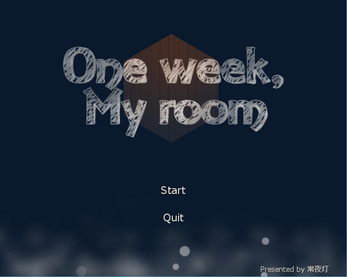 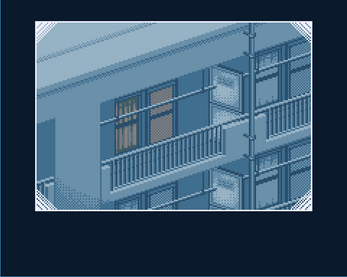